A life as king: celebrating the 10th anniversary of Goodgame Empire

Hamburg, July 29, 2021 – As previously announced, Goodgame Studios from Hamburg has a huge reason to celebrate! Strategy game Goodgame Empire is turning ten and, as is tradition for a round anniversary, the company is hosting a multitude of events and activities in the coming month. 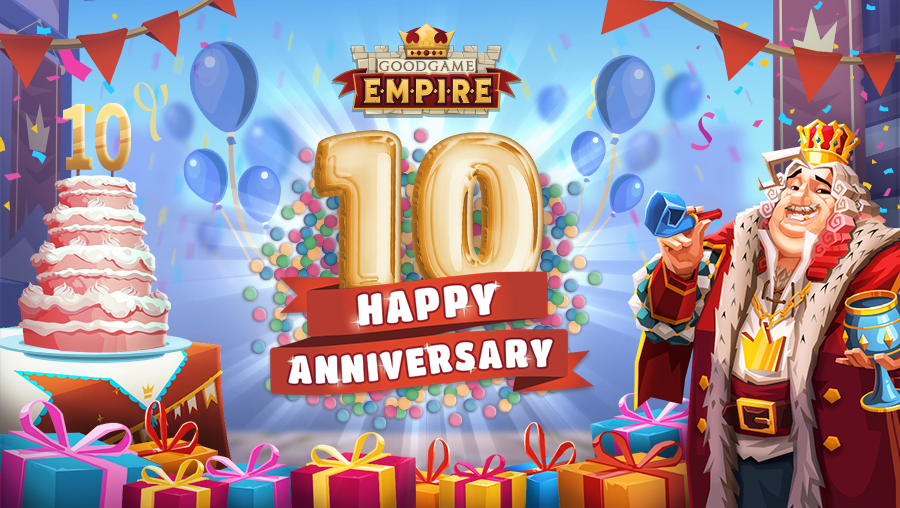 The first events in Goodgame Empire and its mobile version, Empire: Four Kingdoms, are starting this coming Sunday and offer many new adventures for fans of the strategy game. For starters, a revamped version of the popular long-term event for the game’s birthday will be available until September, rewarding lords and ladies with lavish treasures when they collect points via connected events. Adding to the celebrations is a collecting event, which will bless brave warriors with more special rewards, and even the game’s wheel of fortune will be enhanced with new and unique content.

As a thank you for the time spent together, all registered players from level six onwards will receive a present consisting of an event starter package and cosmetic in-game items. Furthermore, those who have played from the very beginning will receive a high-end castle decoration honoring ten years of activity.

More activities relating to the game can be found on the Goodgame Empire and Empire: Four Kingdoms communications and social media channels. Additionally, paid content will see considerable discounts for the duration of the birthday celebration.

Oleg Rößger, CEO and Managing Director of Goodgame Studios states. “As an enthusiastic seafarer, I want to paint this abstract picture of Goodgame Empire initially being designed as a sailing ship for shallow waters, providing the kings on board with picturesque impressions, and instead, we’re now on a flight to Mars, which is not too far off. Continuous evolution of a product in a live service environment, which was conceived for a straightforward user base based on 2000s web browser technology, into a scalable mobile and browser game that can hold millions of players and includes vast new technologies is an enormous challenge. To overcome this challenge, we basically shifted from wind power to rocket engines. We strongly believe that we can even go beyond Mars and discover brand new worlds.”

Benjamin Völkel, Vice President of Live Operations and responsible for the EMPIRE brand, adds, “Goodgame Empire excites millions of players worldwide today. I want to offer my heartfelt thanks to these players for their long standing loyalty. Without them and their community feedback, the game’s continued development would not be possible. Another special mention goes out to our development teams and all Goodgame Studios employees involved, who master new challenges on the daily with ideas that lead to our products’ sustainable success. I am looking forward to many more years with Goodgame Empire and wish everyone lots of fun playing our favorite strategy game’s 10th anniversary activities!”

Fun Facts: Until now, almost four million alliances have been founded in Goodgame Empire, and more than two billion buildings have been built and enhanced an impressive four billion times. On top of that, kings have generated over 12 trillion coins from taxes, levelled up 680 million times and attained 111 million achievements.