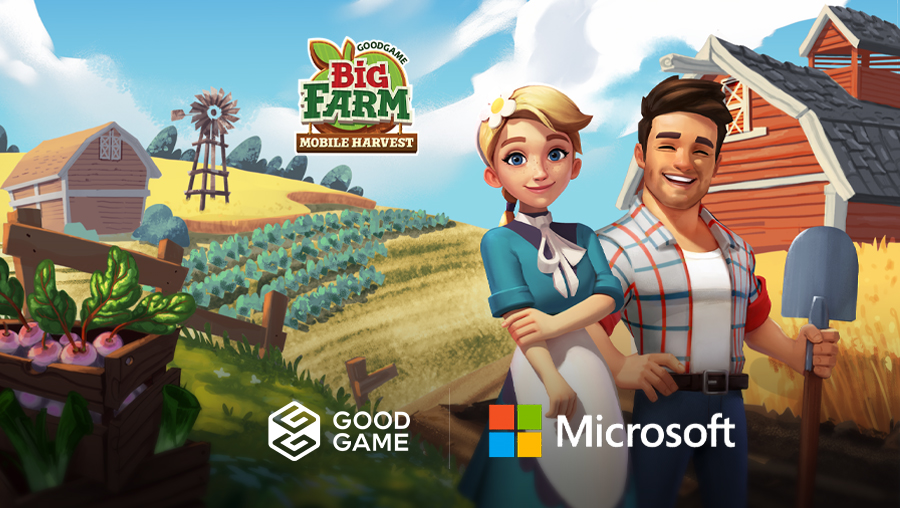 “We are thrilled to partner with the fantastic Microsoft team and expand our strategic distribution channels through the Microsoft Store in order to offer our products to a larger, global customer base in several hundred countries.” says Patrick Abrar, Chief Business Officer of Goodgame Studios.

“We are looking forward to offering Big Farm: Mobile Harvest on the Microsoft Store to a huge new audience with Windows 10 devices,” adds Simon Andrews, head of the studio responsible for the development of the game. “Big Farm: Mobile Harvest is a wonderful game for all fans of the farming simulation genre and offers endless hours of fun.”

The product team at Goodgame Studios adjusted Big Farm: Mobile Harvest to suit the Microsoft Store’s environment and created a Windows 10 universal application, all at the same time as developing new content, which was possible thanks to swift and adaptable workflows.

Having been localized into two dozen languages, Big Farm: Mobile Harvest covers the majority of geographic regions. The Hamburg developer plans to offer ongoing additional releases via the Microsoft Store.

The game is also available for download on iOS, Android and selected Kindle devices.

Since being released by Goodgame in 2012, the Big Farm game series has captivated more than 92 million players worldwide, expanding in October 2017 with Big Farm: Mobile Harvest. Big Farm: Mobile Harvest is a free-to-play farm simulation, playable online with friends, family, and farmers around the globe. The game is regularly updated with new content and offers continuous fun.

Goodgame Studios is a leading developer and publisher of gaming software, specializing in the free-to-play sector. Its focus is on mobile and browser games. The company offers games in 26 languages and has over 500 million registered users worldwide. Empire: Four Kingdoms – the world’s all-time highest grossing app produced by a German company – is part of Goodgame Studios’ portfolio. The games developer was founded in Hamburg in 2009. In addition to the head office in Germany, the company has a subsidiary in Tokyo. Since January 2018, Goodgame Studios has been part of Stillfront Group, a leading free-to-play powerhouse of gaming studios. For further information, please visit www.goodgamestudios.com

Microsoft (Nasdaq “MSFT” @microsoft) enables the digital transformation towards an age of intelligent cloud computing and technological advances. Its mission is to enable every person and organisation on the planet to achieve more.