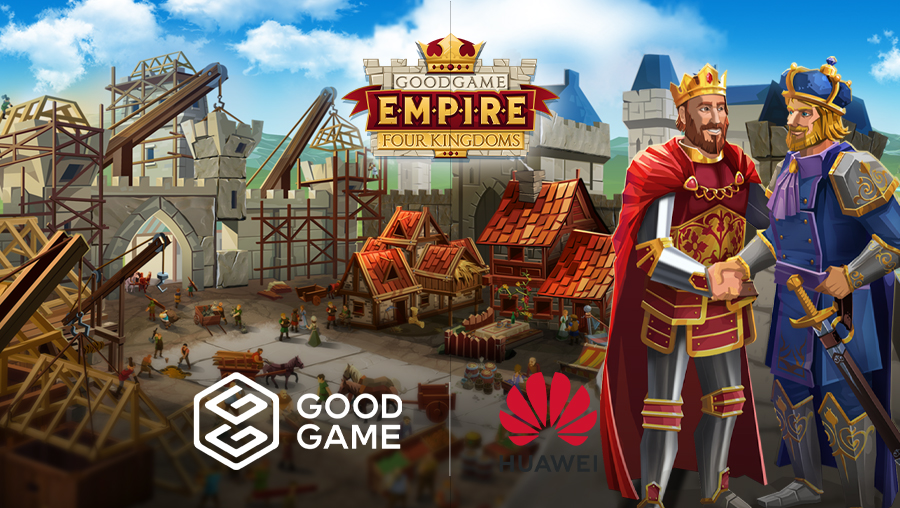 To kickstart the release, Empire: Four Kingdoms will offer new players lots of freebies. For instance, new players receive a mighty starter package consisting of a unique decorative item for their castle, troops for castle protection and a substantial amount of gold coins. In addition to that, players will receive coupons to purchase specific content at better prices.
“We are delighted to be cooperating with Huawei, a giant in the international high-tech industry. This collaboration creates the perfect symbiosis of our innovative, sustainable products and the strong growth of Huawei’s app store, the AppGallery,” states Patrick Abrar, Chief Business Officer at Goodgame Studios.

“HUAWEI AppGallery allows us to further expand our distribution for Empire: Four Kingdoms and to offer the game to a growing audience. Our game is a strategy classic, and owners of a Huawei device are going to enjoy countless hours of fun and excitement,” says Benjamin Völkel, leader of the studio developing the game.

Empire: Four Kingdoms is part of the extraordinarily successful Empire Family with over 220 million registered users and is now available to download for free from the HUAWEI AppGallery. The game can also be downloaded via other Android platforms and the iOS App Store.

Huawei AppGallery is a smart and innovative ecosystem that allows developers to create unique experiences for consumers. Our unique HMS Core allows apps to be integrated across different devices, delivering more convenience and a smoother experience – and this is part of our wider 1+8+N strategy at Huawei. With the AppGallery, our vision is to make it an open, innovative app distribution platform that is accessible to consumers, and at the same time, strictly protect users’ privacy and security while providing them with a unique and smart experience. Being one of the top three app marketplaces globally, AppGallery offers a wide variety of global and local apps across 18 categories including navigation & transport, news, social media, and more. AppGallery is available in more than 170 countries with over 530 million monthly active users globally. Huawei partnered with 2.3 million developers across the globe, and in 2020 the total downloads reached 384.4 billion.

Goodgame Studios is a leading developer and publisher of gaming software, specializing in the free-to-play sector. Its focus is on mobile and browser games. The company offers games in 26 languages and has over 500 million registered users worldwide. Empire: Four Kingdoms – the world’s all-time highest grossing app produced by a German company – is part of Goodgame Studios’ portfolio. The games developer was founded in Hamburg in 2009. In addition to the head office in Germany, the company has a subsidiary in Tokyo. Since January 2018, Goodgame Studios has been part of Stillfront Group, a leading free-to-play powerhouse of gaming studios. For further information, please visit www.goodgamestudios.com.