Hamburg, July 8, 2020 – Goodgame Studios is proud to announce the upcoming launch of their newest title Big Farm Story. The game extends Goodgame’s successful ‘Big Farm’ brand which to date has attracted over 86 million players around the globe. As a farm RPG game, Big Farm Story offers a completely new yet complementary game approach compared to the other games in the portfolio Goodgame Big Farm and Big Farm: Mobile Harvest. Big Farm Story also marks the first game release on Steam for Goodgame Studios. 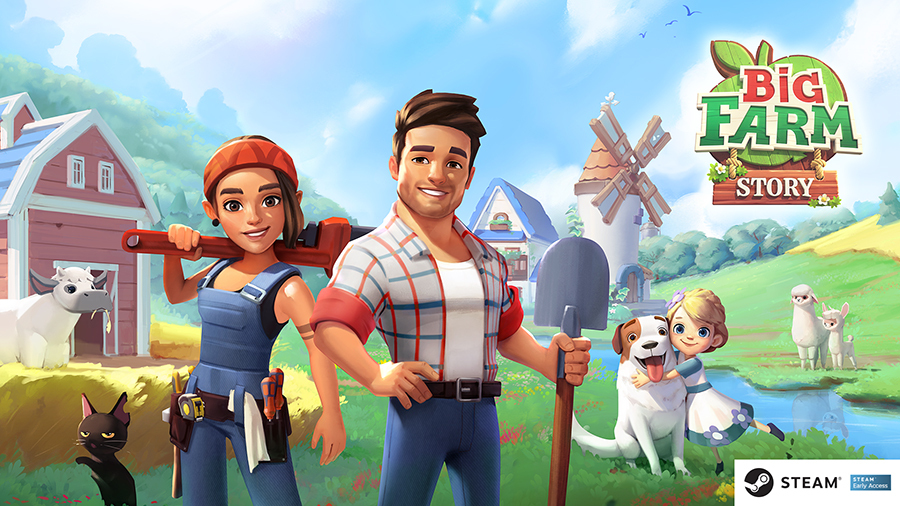 In Big Farm Story, the player finds themselves on the abandoned farm of their grandpa who seems to have disappeared without a trace. While discovering the whereabouts of their missing grandfather, the player must turn the derelicted farm into its former glory, cultivating crops, selling handmade goods and caring for all the animals and plants. Players can expect to embark on an adventure as they explore breathtaking scenery, meet loveable farm friends like Sam and Benny, and discover their own Big Farm Story!

“We are excited to launch Big Farm Story into early access on Steam,” says Simon Andrews, who heads the studio responsible for the game. “We look forward to introducing the beloved Big Farm brand to the Steam community as well as tempting our existing Big Farm players onto a new platform. From the deep storytelling, the new art style to the very unique game features we believe Big Farm Story will complement our highly successful Goodgame Big Farm and Big Farm: Mobile Harvest games while giving our players new experiences of the brand they love.”

Big Farm Story is now available for wishlisting on Steam in preparation for early access later this summer.

Goodgame Studios is a leading developer and publisher of gaming software, specializing in the free-to-play segment. Its focus is on mobile and browser games. The company offers games in 26 languages and has over 400 million registered users worldwide. Empire: Four Kingdoms – the world’s all-time highest grossing app produced by a German company – is part of Goodgame Studios’ portfolio. The games developer was founded in Hamburg in 2009. Apart from the head office in Germany, the company has a subsidiary in Tokyo. Since January 2018, Goodgame Studios is part of Stillfront Group, a leading free-to-play powerhouse of gaming studios. For further information, please visit www.goodgamestudios.com.