Hamburg, December 11, 2020 – Goodgame Studios has been a leader in free-to-play game development for over ten years. Today, the company has yet another impressive milestone to add to its story: The number of players registered across the company’s game portfolio has surpassed the magic number of 500 million. The company’s sustainable growth emphasizes its position as one of the most successful firms in the industry worldwide. 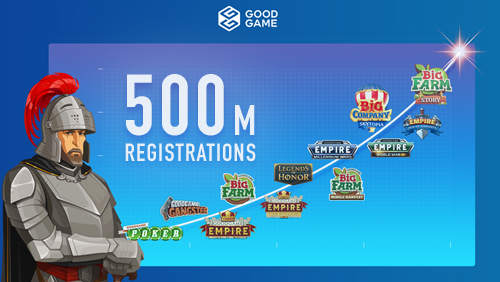 “Delighting half a billion customers with our products is more than just a milestone, it is a commendation of our strategy of developing lasting, competitive products that we continually expand with new content, while adapting to a highly dynamic market. Our key factors for success include the extremely high level of commitment we receive from our employees, their love for our products and the industry, and our users’ long-term loyalty and activity,” says Oleg Rößger, CEO of Goodgame Studios.

In addition, Oleg Rößger states: “In-depth, productive cooperation within the Stillfront family provides us with new opportunities to develop innovative, high-performance products and achieve further success within a highly competitive environment. This is a particularly attractive position for us, and we are very motivated to continue expanding our portfolio over the coming years!”

Since being founded in 2009, Goodgame Studios has experienced continuous growth in the mobile and online gaming sector, as well as in their marketing activities, and is currently looking for highly qualified employees in various fields: http://ggs.social/jobs

Goodgame Studios is a leading developer and publisher of gaming software, specializing in the free-to-play segment. Its focus is on mobile and browser games. The company offers games in 26 languages and has over 500 million registered users worldwide. Empire: Four Kingdoms – the world’s all-time highest grossing app produced by a German company – is part of Goodgame Studios’ portfolio. The games developer was founded in Hamburg in 2009. Apart from the head office in Germany, the company has a subsidiary in Tokyo. Since January 2018, Goodgame Studios has been part of Stillfront Group, a leading free-to-play powerhouse of gaming studios. For further information, please visit www.goodgamestudios.com.